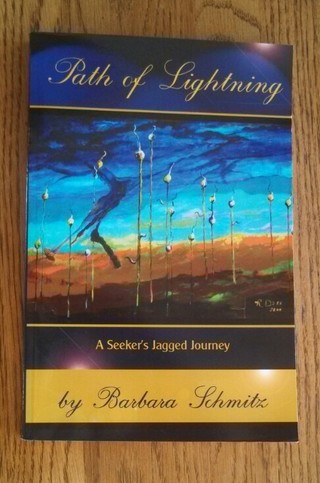 Author and poet Barbara Schmitz offers a heartfull, funny, and deeply moving "spiritual autobiography" that brings the reader along on each stage of her fervent inner quest for mystical experience. Beginning with a Catholic girlhood in Nebraska, she graduates to an unlikely apprenticeship with Allen Ginsberg at the Naropa Institute; a dedicated transcendental meditation practice; and finally to thirty years of joys and struggles with a Sufi teacher (Shahabuddin Less with whom she travels to Bali, Turkey, India, Kashmir, and the Holy Land.
Incisive as lightning-the meaning of her Sufi name, Vajra-her questions and yearnings are our own, and she doesn't let God, her teacher, or herself off the hook.

"In Path of Lightning, this captivating writer shares the story of her spiritual journey from a Catholic girlhood to various forms of illumination. Her path is filled with both yearning and acceptance, drama and banality. Along the way, she meets a vast array of spiritual seekers from Sufi leaders to Allen Ginsberg. She does this while living in the small, remote town of Norfolk, Nebraska. Barbara is both ordinary and extraordinary. She is one of those wonderful people who can hear the music of the moon. In this book, she shares the music with us." --Mary Pipher, author of Reviving Ophelia

Yesterday, when I arrived back in New Iberia, Louisiana for my winter sojourn, I found a package of books from Pinyan Publishing in Montrose, Colorado, one of which I had ordered several weeks ago, a spiritual autobiography entitled Path of Lightning by Barbara Schmitz. The book lives up to its title as a path of lightning as the author takes readers on her zigzagging search for God that begins with her Roman Catholic childhood in Nebraska and continues into her apprenticeship with Shahabuddin Less, a Sufi teacher with the Sufi Order of the West.

Schmitz's journey is a long, circuitous one that takes her from Naropa Institute and study with Allen Ginsburg, (who was invited there by the Tibetan Lama Chogyam Trungpa), to a Peace Vigil above the Wailing Wall in Israel, with travels along the way in Bali, India, Turkey, and Kashmir.

Schmitz, an English teacher and writer living in Norfolk, Nebraska, also studied Carl Jung, Joseph Campbell, and Paramahansa Yogananda, made pilgrimages to sacred places around the world searching for mystical experiences, and ultimately found her place within the Sufi tradition by practicing Sohbet (spiritual discourse) with Shahabuddin, her teacher and mentor.

During her journey through ·two year intensives," and the deepening of her spiritual experiences, Schmitz began to feel despair and experienced the "dark night of the soul": a period of boredom and aridity accompanied by stagnation of will and intelligence. She quotes from one of my favorite authors, Evelyn Underhill, the Anglican mystic who wrote the "bible" on the enhancement of consciousness, Mvsticism: A Study of the Nature and Development of Man's Spiritual Consciousness. and who advocated that the dark night is a natural balance to the highs of spiritual exultation and the reception of the Holy Spirit. Underhill would have applauded Schmitz's long journey as she wrote that "we are all the kindred of mystics ... "

I particularly appreciated the section relating to the famous Turkish-born poet Rumi, who has gained popularity in the U.S. with the publication of his famous poem (included in Path of Lightning): "This we have now/is not imagination. /This is not/grief or joy. /not a judging state, /or an elation, /or sadness. /Those come and go /This is the presence/that does not..."

Schmitz is a poet who has been recognized by Natalie Goldberg as someone who "endeavors to understand the mystery and beauty of being alive. I name her the Queen of Constancy for her devotion to meditation and never letting up or giving up on her spiritual journey. " One of Schmitz's minimal poems in Path of Lightning, which she wrote on a pilgrimage to Turkey, illustrates her training in and mastery of metaphor, as well as her appreciation for the style of Sufi poet Rumi: "In Turkey/in the cemeteries/the uncut grass/on graves above/grows long/competing/With the uncut hair/beneath."

Schmitz struggles through the four C's on her journey. "Compare Not, Complain Not, Criticize Not, and Condemn Not" and remarks, "If I really do these, there's not much left to talk about. I made a small sticky note with the four C's on it and attached it to a photo on my desk at work to remind me to practice them at school I gave it a stab - glad I didn't have to report to anyone on how well I did them..."

Those four C's resonate throughout the Path of Lightning and are good guideposts for anyone engaged in a deeper search for spiritual enlightenment and compassionate treatment of fellow human beings.

On one of Schmitz' trips to India, she pays loving tribute to her husband who has made his own spiritual journey alongside her to various countries and through her many illuminations. The sincerity of his passage impressed me deeply: "I sometimes don't notice right at the moment, but Bob is as much my teacher as Shahabuddin, probably from the moment I made the decision to trust that my love for him (Bob) would lead me to God. He is always beside me, clarifying, discussing, helping, redirecting me when i get mixed up or confused..."

This is an unusual book written in a highly accessible style by a highly enlightened person who was given the name Vajra by her Sufi teacher after her first trip to India-- a name that means "transformation by the lightning bolt," and the Path of Lightning is filled with illuminating flashes that will attract readers interested in further developing their spiritual growth.

An incisive note by Schmitz on the compassion advocated throughout Path of Lightning: " Our path is to live with others, to learn to be a human being, Self analysis is looking at the self in relation to one's family, peers, and friends... and I remember Shahabuddin teaching in one of our seminars, 'We are sitting on a pile of gold. Why do we want to pick up rocks?'" After reading this personal odyssey about self awareness and growth toward "otherness," we might ask, "Why indeed?!"

Some teachers float in and out of your life and leave nothing more than an impression of knowledge. You forget the person. In many cases, you even forget the lessons taught. This is not so with Barbara Schmitz. She has a personality like a warm summer breeze and a passion for writing like a thunderstorm those breezes almost always signify. As you might imagine, she is hard to forget.

Though unforgettable, I always considered her something of an enigma. She was my creative writing, poetry, and mythology teacher at Northeast Community College in Norfolk, NE, some 14 years ago and that alone is a mystery worthy of Sherlock Holmes' attention. She never 'fit' in that small town in Northeast Nebraska, even among the professors. She is unique, forcefully liberal, and somehow defiant, as she hovers above the rest of us, looking down with benevolence at our mortal comedies.

At least, that's how I have always seen her.

So when her 'spiritual autobiography,' Path of Lightning: A Seeker's Jagged Journey, was released by Pinyon Publishing last year, reading it quickly raced to the top of my 'must do' list. I thought if anything, her book would give me some insight into understanding the person I always thought of as a mysterious 'more than.' Guess what? I was correct.

Path of Lightning is an honest, unwavering description of Schmitz's journey to spiritual fulfillment. It is also a portrait of her life. I find it ironic too since one of the main lessons she learns on her journey is that teachers-spiritual or otherwise ­are human. Keeping that in mind as I read is difficult because, as you may have figured out by now, I've hero-worshipped her for some time. But through the lessons she learns from the likes of her parents, her husband, Catholic Dogma, John Neihardt, Allen Ginsberg, Shahabuddin Less, and herself, I also learn a more appropriate interpretation of her is not that she is 'more than· human but simply human. Being human, she realizes in her journey, is being divine. Once we come to accept this, then we can stop seeking what we already have, or as Shahabuddin tells her near the end of the book: "We are sitting on a pile of gold.
Why do we want to pick up rocks?"

But there is more to it than a spiritual journey. Reading her autobiography makes me feel like I am getting to know this woman I have admired but who has been a mystery to me most of my adult life. For that, this book is priceless. From her early beginnings as a scared Catholic girl praying for death so she could go to heaven, to a middle-aged woman searching for answers to questions most of us don't bother to ask, Schmitz takes her readers on a journey that is enlightening, heartening, and eye opening. If you've never had the chance to meet Schmitz, you are missing out on a great experience. If you have never had the chance to learn from her, you are missing out on an even greater experience. If you pick up Path of Lightning. you will be able to take care of two birds with one book.

"A rich life closely observed with surprising turns and insights. The poems breathe new life into what is around us, make us wake up to everyday brilliance. I am amazed how Schmitz continues to write what she loves through all these long years. A unique voice and a big heart,these poems need to be read."

What Bob Says (Some More)
What Bob Says (Some More) is about pleasure and delight, talking and listening/not listening, sex on the porch, being right, giving up, God, hearts and wings, yogurt, books, sirens, red/blue ambulance lights, happily ever after.
Always the Detail
A deep drink of human joy and sorrow. Songs of Living Aware, richly.
What Bob Says
"By the end of this chapbook, Bob has become as real as your crazy uncle.
--Phil Wagner
How Much Our Dancing Has Improved
“Barbara Schmitz is the Lucinda Williams of the poetry world.”
--Paul Zarzyski
How to Get Out of the Body
“. . . chillingly honest. Schmitz is a courageous poet. She tells us the truth.”
--Greg Kuzma
The Upside Down Heart
Intense narrative poems about poet’s pilgrimage to Israel

Path of Lightning: A Seeker's Jagged Journey
"Schmitz endeavors to understand 'the mystery and beauty of being alive.' I name her the Queen of Constancy for her devotion to meditation and never letting up of giving up on her spiritual journey. Enjoy the rich trip."
-- Natalie Goldberg,
author of Writing Down the Bones